History of the Breed

Many dog breeds have a history that, in many cases, spans hundreds if not thousands of years, but this is not the case with the Bouvier des Flandres. Its antecedents may stretch back this far, but it was not until the end of the 19th Century in a particular area of Belgium and France, that it was noticed by veterinary surgeons visiting local farms that certain dogs were beginning to look very similar. 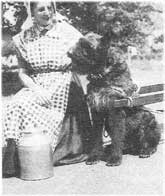 The typical animal was an upstanding, fearless working farm dog; it was intelligent and had the strength to turn the milk churn, or to pull small carts for the bakers or milkmen.

Originally, there were three kinds of Bouviers; 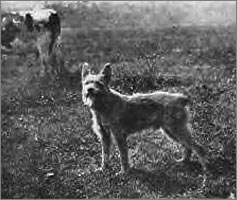 The Bouvier d’Ardennes,
were smaller, with prick ears and a short tail, known for a while as ‘bergeots’ by the Walloons of the Wallonie district. These dogs were the smallest Bouvier. 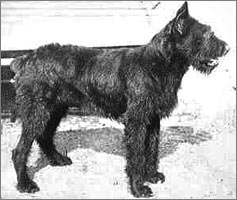 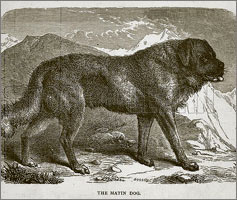 The Bouvier de Roulers,
at the same period there was a large Bouvier, which took its name from the area around the French town. In fact, it had more in common with a Matin , which was a large, smooth-coated dog.

The Bouvier des Flandres
found in the North of France near Ypres and Warneton. It had a harsh coat and was used by shepherds.

In this area there was also a breed of dog call a Berger Picard, probably resulting from a Matin-cross.

The turn of the century was not a good time for the development of the sheep and cattle dogs, as the town people were following the fashion for large dogs following a revival in dogs being used for police work, and so the large Bouvier de Roulers was more in demand. But there were fanciers who appreciated the all-round working ability of the Bouvier des Flandres.
Professor Reul of the Curegheun Veterinary College wrote of their speed and courage and described how they would jump high in the air on all four legs to avoid the hooves of cattle. Cows who showed aggressions towards other dogs would be wary of the Bouvier des Flandres and were frightened to confront it. Professor Reul thought it would be well worth encouraging the development of the type of dog.

Messieurs Moermans and Paret, dog fanciers of that era, were said to be the first serious breeders of the Bouvier, but even they were not in agreement over type, and so there were continual arguments as to what should go into the Breed Standard.

At the first show in Hasselt in July 1900, four so-called ‘Bouviers’ appeared, but they differed in type and looked more like sheepdogs, although they did work cattle. The following year three ‘Bouviers’ were shown in Brussels, but they resembled Briards, and no doubt there had been matings between the sheepdogs of Northern France, the Picard and the Belgian dogs. These dogs were not heavy enough, but at a show in 1903 Professor Reul saw a dog named Tom, and after much thought, he drew up a provisional Breed Standard.

In 1910 at an International Show in Brussels the breed was represented by two dogs, Rex (RSH 1766) and Nelly (RSH 1892) belonging to Monsieur Paret, the Bouvier fancier of Ghent, who is considered to have established the foundation bloodlines of the Bouviers as we see them today. The judge of this show expressed his opinion that the Bouviers should not be shown as they should look gruff and rustic, rather than be paraded as elegant show dogs, but eventually the efforts of Monsieur Paret bore fruit and fanciers began to take the breed seriously. At this time, a few Bouviers were being shown in Holland, but they were known as Vlaamse Koehond, and their colour was black, grey or blonde.

The First World War created problems for the breed, as their territory became a battlefield. The number of cattle dogs was reduced almost to extinction, and just a few survived as stretcher-bearers, messengers and gun carriage bearers to the Front Line. Bouvier with soldier

After the war, the Bouvier moved from its original home territory, first to Antwerp and Eastern Flandres, then to the Hainault country, France and the Netherlands. During this period there was a real aim to be selective in breeding, and to produce dogs with a distinct type in mind that conformed to the Breed Standard drawn up by the Club National Belge du Bouvier des Flandres in Ghent on 15th January 1922. It took a long time for the results of the selective breeding to become apparent, and this was because of all the differing types which had contributed to the Bouvier. One type would predominate for a time and then another. Type was the most important factor; it was wisely agreed that the coat colours were a secondary consideration.

Gradually the breed improved, and it became evident a very satisfactory type was developing. This was a square-built dog with a massive chest, a well-chiseled head, enhanced by eyebrows and beard, carried proudly on a strong neck. The tail was high-placed and carried gaily to emphasize a bold temperament. The dog stood four-square on well-boned legs, but was without heaviness in movement.

In 1919 the first Belgian Bouvier was imported into Holland and in 1923 the Dutch Bouvier Club was founded. There was a small band of Bouvier enthusiasts in Holland, but the Bouvier was far more popular in Belgium at this time. One of the reasons for this was that the Bouvier was used by Customs Officers and by smugglers, as it was dark in colour, very intelligent, and was able to cross the frontier without being seen. Poachers also used them because they were very fast-moving.

Bouviers have a good nose for tracking and this made them useful as police dogs; they were courageous guards in the Army and could be trained to carry messages, moving at night without being seen. During the Second World War they were used by the Resistance movement in Holland, and they proved to be so useful that sometimes a whole street would contribute scraps of valuable food for their upkeep, so that they continue their war effort.

There were breeders in France, Belgium and Holland who knew how they wished the Bouvier to evolve, but inevitably there were disagreements, which were to the detriment of the breed. The breed also enjoyed its fair share of luck. In  In

1924 there was a boy called Justin Chastel,  who lived in the French-speaking part of Belgium, and he had his own ideas about the Bouvier. He had a Bouvier female and had seen a lovely male that lived only a few streets away. He came from a poor family so a stud fee was out of the question. One dark night when he was exercising his female, the male Bouvier appeared on the scene, and nature took its course. When the puppies were born, Justin’s mother made him pay the stud fee of 50 Francs – and this was the start of the famous De La Thudinie kennel.

Over the years dedicated breeders have tried to develop and improve the Bouvier, encountering the usual setbacks that arise when a breed is being established.

It is only hoped that as this breed continues to grow in popularity that breeders will work to retain the true type and character that make the Bouvier des Flandres a unique breed.

THE BOUVIER DES FLANDRES IN BRITAIN

The Bouvier des Flandres first became established in Great Britain in 1972, although in 1924 a female and two puppies were registered at the Kennel Club by a Captain H. P. Dick, and in 1948 a male named Jeep was also registered. Obviously, some Bouviers may have been brought in without the owners bothering to register them, and others may have passed through in transit to other countries.

The first positive step towards importing with a view to getting the breed established were taken in 1973 when Mrs. Pauline Brigden (Qassaba) imported Tarina de la Thuninie of Qassaba from the world famous Belgian kennel of Justin Castel. Mrs. Brigden was helped in this endeavour by Mrs. Leonard, an American living in Britain, who had already imported a male, Sibeau de la Thudinie, from the same kennel. It was hoped that Tarina would arrive in whelp, but unfortunately this was discovered not to be the case. However, she was such an excellent specimen of the breed that Mrs. Brigden retained her and imported a second female, who was carrying pups. Her name was Una de la Thudinie of Qassaba, and in March 1973 she whelped nine puppies in quarantine, by the sire Uran de la Thudinie.

This litter was to be the start of the breed becoming established in Great Britain.

In 1973, two litters were bred and Bouviers appeared in the show ring for the first time. There were only four or five dogs at first, and exhibitors had to contend with the fact that very few English judges actually recognised the breed.

Those that did had heard of their reputation on the Continent, and were reluctant to even approach!

You could not conclude your breeds history without highlighting some esteemed Bouvier links such as presidential ownership or guarding the Princess of Wales. 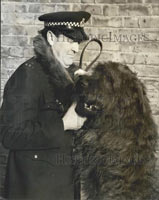 In 1975 Jango, handled by P.C. Edgar Dyson, became the first operational UK Bouvier police dog. At his ‘passing out’ he beat twenty two German Shepherd Dogs and one Weimaraner to become the top police dog. He became well known around the streets of London where he patrolled, and on occasions he guarded the Princess of Wales.

I would like to take this opportunity to acknowledge and thank Ms Miranda Lucas (SACUL) who has given us permission to use articles and information from her own published book ‘Book of the Breed The Bouvier des Flandres’.

Miranda and her mother were at the forefront of the Bouvier when it first came into the UK having pick of litter from the puppies welped from Una de la Thudinie of Qassaba. So they, along with a number of other breeders in later years, can be thanked for establishing such a wonderful breed in the UK.

By continuing to use the site, you agree to the use of cookies. more information